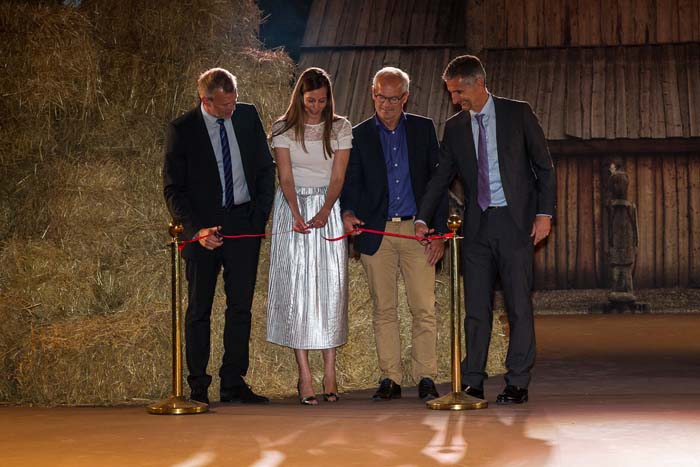 Customers, farmers, employees and friends of the house all attended when Kopenhagen Fur opened their doors for a summer party, where the completion of the construction work in the production area was celebrated.

1200 guests were seated in Kopenhagen Fur's newest production hall for the summer party.

Minister for Children and Social Affairs, Mai Mercado, was invited to cut the silk ribbon alongside Kopenhagen Fur's CEO, Jesper Uggerhøj and Chairman of the Board, Tage Pedersen. The many guests also saw a fashion show by fashion expert, Jim Lyngvild, called The Ride of the Valkyries, which he has previously received an award for in Shanghai.

Jesper Uggerhøj gave the first speech of the evening.

- Kopenhagen Fur is the global centre for the fur trade. From the outset, we had great ambitions and then in 1963, we had to build new premises because great ambitions require large premises. We have been building ever since - and for exactly the same reason. Because we never stand still, we are always on our way forward with new initiatives, innovation and growth ambitions, he said.

The ambition for growth can also be seen in the new packing system, which is of great benefit for the customers.

- With the inauguration of this building, we now have more than one hundred and twenty thousand square meters of available space, said Søren Valentin, COO, Kopenhagen Fur, and added:

- Two new vacuum packing machines have been taken into use this year, and an additional three machines will be added during the autumn. This means that all fur skins will be vacuum packed as from the next sales season. The system protects the skins from pests, moisture, water and weather conditions during storage and on their onward journey to the tanneries.