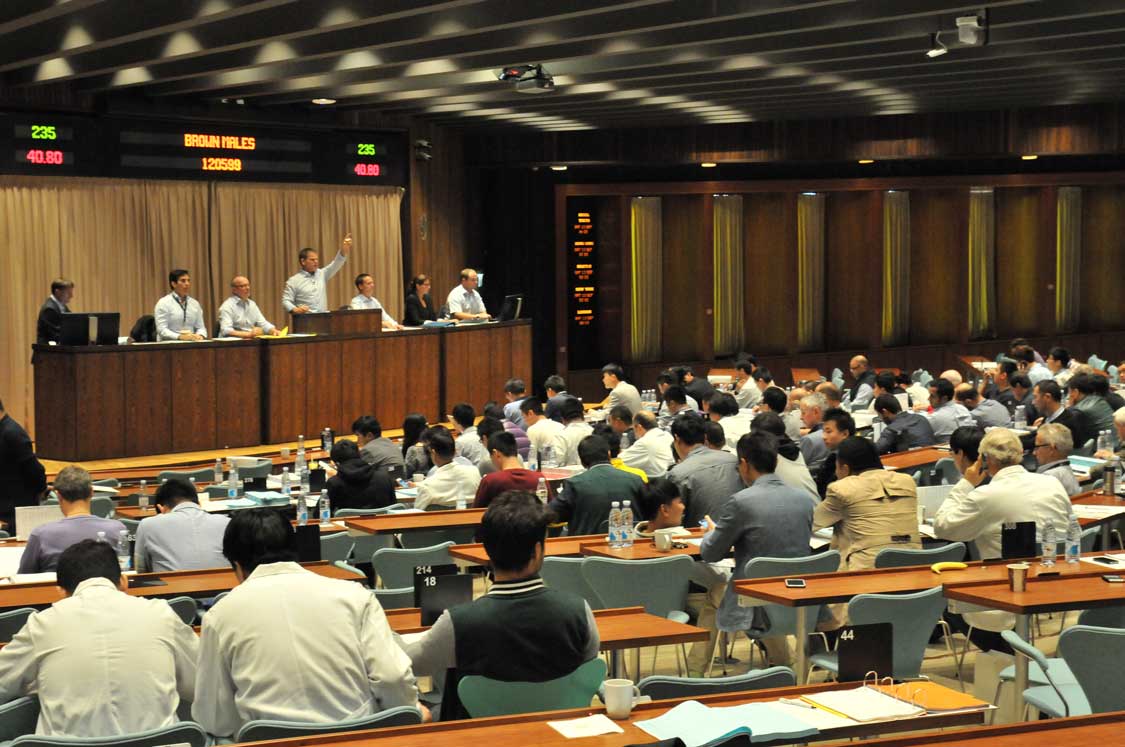 销售条件 - Read our conditions of sale in Chinese here.

§ 1. The following expressions shall have the meaning respectively assigned to them throughout these conditions of sale:
“Auctioneer” means the person who conducts the auction on behalf of the Company.
“Company” means Kopenhagen Fur a.m.b.a. of Langagervej 60, DK-2600, Glostrup, Denmark.
“Lot” means each lot of goods offered for sale by the Company.
“Prompt day” means the day appointed by the Company as the day on which the Purchaser is required to pay for a particular lot.
“Purchaser” means any person (whether acting on his own behalf or as agent for another) to whom a lot is sold by the Company, and where the context so admits, any transferee of the lot.
“Transferee” means any person to whom the benefit of any contract sale is assigned by the Purchaser in accordance with these conditions.

§ 2. The Company conducts auctions by an auctioneer held at the premise of the Company for the sales of skins originating from various individuals and legal entities. Any purchase at the auction are transacted in the currency of Danish crowns (DKK). Payment shall be made in such currency in which the Company has agreed to invoice.

§ 4. The skins and lots, respectively, are sold as in their actual condition at the fall of the auction hammer. All information in the issued catalogue and all samples supplied as showbundles are provided strictly without liability or prejudice and intended to serve only as a guide in connection with the inspection of the skins, which a purchaser is advised to undertake prior to the auction. No warranties whatsoever, expressed or implied, are made concerning the composition of the lots, the quality, the description, the condition, the suitability of the skins or otherwise. Purchased lots must be accepted by the purchaser AS IS at the fall of the auction hammer, regardless of any faults or defects, which entails that the purchaser waives any right to claim for any kind of defects.

CONDUCTION AT THE AUCTION

§ 5. The skins are offered and sold at the auction in lots. Bids apply to the single skin, the purchase price for the lot being the bid multiplied by the number of skins in the lot. The Company may determine the minimum amount by which bids must be raised. The lot falls to the highest bidder. Should two or more individuals be tied for the highest bid or should a dispute arise concerning the bid, the auctioneer will invite further bids. If this does not lead to a definitive solution, the auctioneer is authorized, at his absolute discretion, to decide conclusively who is to be deemed the highest bidder.
The Company reserves the right to alter the order of lots to be bid on, to genuinely bid by itself and to withdraw lots before or during the auction at their sole discretion. The Company may refuse to accept a bid from any purchaser and shall be under no obligation to indicate the reason for its refusal.
Any individual whose bid is accepted by the fall of the auction hammer is personally liable for payment of the skins thus purchased and, where the bid has been made on behalf of other individuals or legal entities, has personal and joint liability for payment of the purchase price with the individual or legal entity (identified by buyer's number) - the purchaser - on behalf of whom the bid has been made.
On the fall of the auction hammer, the skins are held for the account of the purchaser and at his risk, but will not be delivered to the purchaser until the purchaser has fulfilled all his payment obligations. The Company shall not be liable for any loss of or damage to the skins while they are held except as provided for in § 15 below.

§ 6. Notification by a purchaser that an error has allegedly been made in bidding shall be made on the spot and at the latest before the 20 following catalogue numbers have been offered for sale. Any claims submitted thereafter shall have no legal effect whatsoever and is not accepted by the Company.

§ 7. Every purchaser shall, upon request, prior to, during or after the auction, in a manner specified by the Company, pay on demand such deposits or increases of deposits as security for the purchases, as shall be required by the Company.

§ 8. The purchaser shall pay the purchase price plus auction fee as set out in the applicable Auction Sales Catalogue published by the company before the relevant auction. The purchaser shall also pay all interest and costs which may accrue on purchased skins subsequent to the fall of the auction hammer.
The skins are sold on Incoterms “FCA (Free Carrier)" from the Company’s warehouse in Glostrup, Denmark. Thus, any and all charges relating to delivery, such as export licenses and customs clearance, commissions, VAT (when applicable) and similar costs related to the purchase shall be paid by the purchaser, at the charges set out in Kopenhagen Fur’s Shipping Fee.

Furthermore, the purchaser shall pay any import related customs clearance, commissions and the like due on the purchase set out in Kopenhagen Fur’s Shipping Fee as well as handling, packing, packing control and any other expenses in connection with the delivery at the charge set out in Kopenhagen Fur’s Auction Fee.
All charges are exclusive of VAT (if applicable) and will be invoiced by the appointed forwarding agent on behalf of the Company.

§ 9. The due date (prompt-day) for payment of the purchase price shall be the 21st day after the last day of the auction and all liabilities of the purchaser shall be fulfilled as of the close of business on the due date.

§ 11. If the purchaser has not paid the purchase price when due, the purchaser shall be obliged to pay interest from due date (prompt day) at a rate which will be published prior to each auction by the Company. The rate may be changed at 21 days' notice to the purchaser. Payment of interest shall not entail that the Company has waived any of its rights as set forth in these conditions of sale.

§ 12. The Company shall retain title to the skins sold until all obligations of the purchaser have been fulfilled, only thereafter shall it pass to the purchaser. In the event of a purchaser failing to fulfil its obligations towards the Company when payment is due, or in the event of a purchaser becoming insolvent, bankrupt, suspending payment, being subject to any form of insolvency or bankruptcy, then in any such event any deposit made or any payment made on account shall be forfeited in full. The Company shall be entitled to rescind the purchase and resell the skins without further notice and retain the proceeds thereof. The purchaser shall reimburse the Company any loss on such resale together with other expenses including interest.

§ 14. Delivery of purchased skins is made from the Company's warehouse in Glostrup, Denmark (the place of delivery) where the skins shall be distributed in proper rotation as and from the day subsequent to the auction against fulfilment of the purchaser's obligations. If the Company is prevented from carrying out such delivery by reason of strike, disturbances, risk, danger, intervention by a public authority or other incident beyond the reasonable control of the Company, the purchaser shall not be entitled to rescind the purchase nor to claim compensation and the purchaser shall fulfil his obligations as soon as the hindrance to delivery has ceased.

§ 15. Skins shall while in the Company's warehouse be covered by insurance against fire and theft only at the Company's expense, but the Company assumes no other responsibility than to compensate the purchaser - contingent upon the purchaser's fulfilment of his obligations - with the amount of money that is paid by the insurance company. The Company shall in no case have any responsibility for loss of income or other indirect or consequential loss. The Company´s liability shall in no case exceed the value of the lot in question, as shown by the Company´s invoice.

§ 16. Any dispute that may arise between the Company and the purchaser or the third party to whom the purchaser may have transferred its rights and obligations (the transferee) or any other party obliged to pay the purchase price shall be determined subject to Danish law. The case shall be tried by the Maritime & Commercial Court in Copenhagen (Sø- og Handelsretten) unless the Company prefers to permit the case to be tried by any other court or competent jurisdiction or if the Company so requires that the case be settled by the Danish Institute of Arbitration.
The Company is entitled to claim legal expenses (including court fees and reasonable attorney's fee) incurred in connection with such litigation or arbitration.

§ 17. These conditions of sale are binding. The conditions can only be deviated from if the Company, in each particular case and without prejudice, accepts such deviation in writing.

§ 18. All the rights established in these conditions of sale shall remain fully valid and applicable regardless of the Company's failure to exercise one or several of them.

§ 20. These conditions of sale have been drafted in the English language and translated into Chinese, Russian and Turkish. In the event of any discrepancy as to the understanding or the interpretation thereof, the English version shall prevail.

§ 21. These conditions of sale enter into force as of February 6, 2018, and shall apply until further notice.