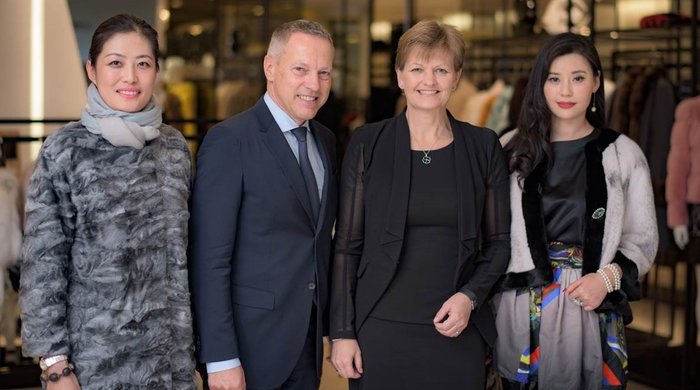 Danish Minister of Environment and Food Eva Kjer Hansen visiting Beijing - here standing right next to the Ambassador of Denmark in Beijing A. Carsten Damsgaard.

Eva Kjer Hansen (V) Danish Minister of Environment and Food is spearheading the political support of the Danish mink production after a federal discussion in Holland has reignited.

The Dutch Parliament has banned farming of animals if the profit derives primarily from their fur and not the meat. The majority of the Dutch politicians seem to think that it is ideologically wrong to wear fur and leather from animals. This  amongst other effects the Dutch mink production.

- The production of mink fur is important to the Danish economy, and the industry employs thousands. It is a Danish tradition to produce the highest quality of mink fur for which there is a substantiel demand. The Danish government does not plan to follow Holland's example, says Eva Kjer Hansen who is in currently in China heading a Danish export promotion.

Focus on health and welfare amongst animals

In Denmark both the authorities and the industry itself have focused on guarantying and improving the animal health and welfare in mink farms for several years.

- I trust the production of mink in Denmark to be sound in terms of animal welfare. During the last five years there has been an increased focus on the health and the welfare of the animals amongst the fur breeders, and fewer violations of the animal welfare legislation have occurred on the mink farms, says Eva Kjer Hansen.

Actions have been taken towards statutory education amongst new fur breeders as well as demands of periodic training of all breeders. Furthermore, mandatory health consultancy has been introduced on the mink farms along with an increased control. In combination with the industry's own initiative "check the farm" these actions have increased the sectors' focus on animal welfare, and it has secured that the rules are followed, writes the Ministry of Environment and Nutrition.

Danish fur farming is widely surported by parties in the Danish Parliament. The Danish agricultural newspaper Effektivt Landbrug has asked the spokesman from the Danish People's Party, Liberal Alliance and the Social Democrats about their position to mink farming.

- We will not ban it in Denmark because the consequences would be that the mink breeding moved to China for example where the animal welfare is much worse than in Denmark. It is better to keep the mink production in this country and then be attentive to it. Then at least we have the possibility to do something.

Liberal Alliance's spokesman for  agriculture Mette Bock says that "the judgement unfortunately did not surprise me, but I hope that Denmark will still uphold its political support of mink breeding since it is a legitimate part of the Danish agriculture, and it is beneficial for both Danish farmers and Danish export earnings. But of course the conditions have to be orderly."

Nor does the social democratic spokesman  for animal welfare Julie Skovsby consider the development in Holland to cause any change in position:

- Of course we follow the investigations within the sector. But we are not planning for changes now.

The Dutch mink breeders are suing the Dutch government because the ban on breeding animals for their fur does not contain any compensation for the breeders when they lose their livelyhood. They think that the ban is a violation of the European Convention on Human Rights which specifically supports the human right to pursue one's profession. The first court acknowledged their cause, but now the second court has made a completely opposite ruling. The Dutch mink breeders will take this ruling to the Dutch Supreme Court.