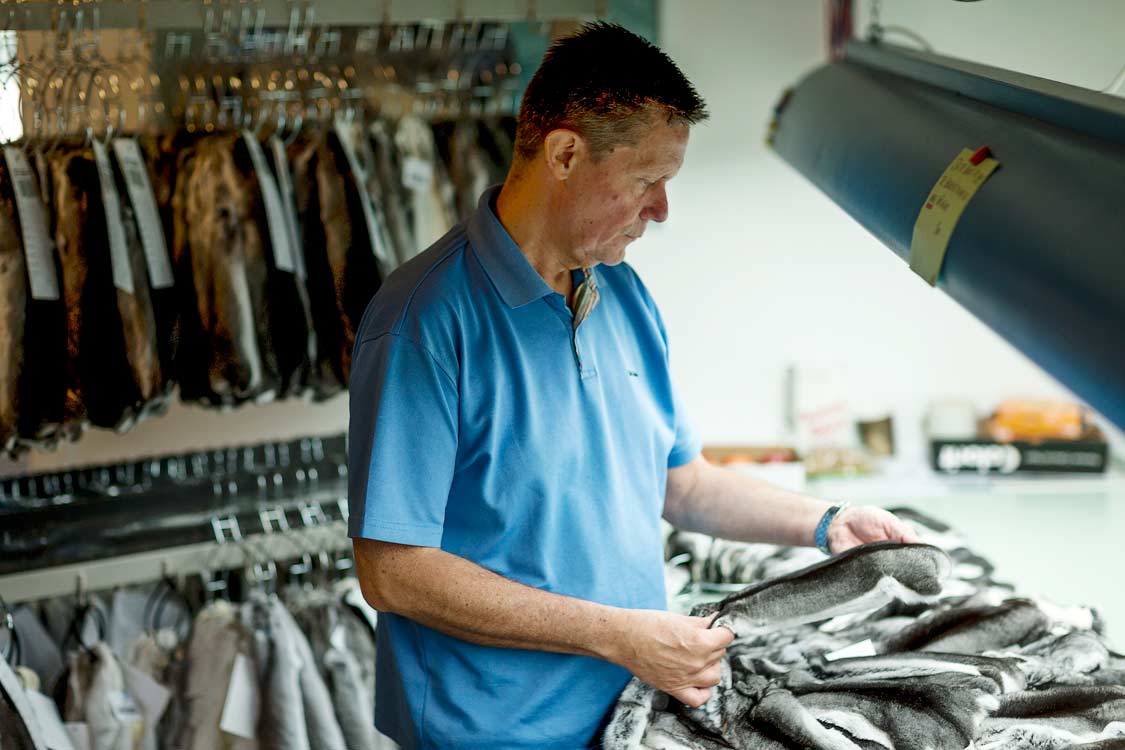 Stig is one of the best-known faces around at Kopenhagen Fur. He’s been in the company since 1979.

His job consists of handling contact with farmers and collecting skins for Kopenhagen Fur in the Nordic countries. Five times a year, he’s also an auctioneer with chinchilla sales as his specialty. We talked with him about his job then and now, and about the similarities between running an auction and a football match.

Why and how did you become an auctioneer at Kopenhagen Fur?

Because I was young and ambitious, and because it sounded fun. I had been in the company a few years, so they asked me. First, I thought that they just wanted me temporarily, but now it has been about 30 years. I stay with it because it’s fun, and because it also helps me with my day job. Many of the farmers I work with like that an auctioneer comes by and hears things from their perspective.

Do you remember the first time you were on stage?

You’d better believe that I was nervous. Now I had experience from other positions on the five-man auction team, but taking charge over an entire auction was a big step. To make things worse, I had on a weird tie where the microphone began to slip, so suddenly customers started yelling that they couldn’t hear me. Luckily, they were understanding, since they knew that it was my first time and they expected that I’d quickly become better – which I did.

Does that mean you don’t get nervous anymore?

I won’t say that the auctions make me nervous, but I still get this feeling of tension, of excitement, before it’s my turn to go on. But I think that’s a good thing, because it reminds me that you should never run off routine. You need to be completely focused when you are up there, no matter how many times you have stood there before.

Can you give an example of something that has changed throughout the years that you have been part of the auction?

Hmm… In the old days, in my early years here, the tone could sometimes be a little aggressive. One auction there was one buyer that threw an ash tray at me. But that was a long time ago, and a lot has changed since then. Today the auction environment is much more controlled and you can be sure that everyone behaves professionally.

With time you became the leading chinchilla auctioneer in house? How did that happen?

Well again, because they asked me. And because I really liked the idea of having an area that was mine as well as something that I could specialise in.

Do you find that there is a difference selling chinchilla instead of mink?

Completely. When we sell mink, especially the popular types, the auctioneer’s biggest challenge is keeping control of the many different buyers who want to make themselves known. Chinchilla sales are different. There, you have maybe 15-20 bidders in the auction hall and you keep a good eye on them because they bid more discreetly. They know each other well and watch each other. Since the start prices for chinchilla are lower, it takes time with buyers who slowly and calmly bid each other up. All that makes it a very tactical game.

When that happens, does the auctioneer also feel that he is playing a game?

What will your advice to me be if I wanted to be an auctioneer with Kopenhagen Fur one day?

I would advise you to ask yourself if you really wanted it. The auction weeks are much more intense than people think. Customers yell and all eyes are on you and your responsibility. Don’t misunderstand me, I’m not trying to hinder anyone. If you really are focused on the task, and if you are good enough to lead the auction, then there is without a doubt a very rewarding and interesting job ahead of you. I will just say, that you need to understand in advance that it is not a job for everyone.