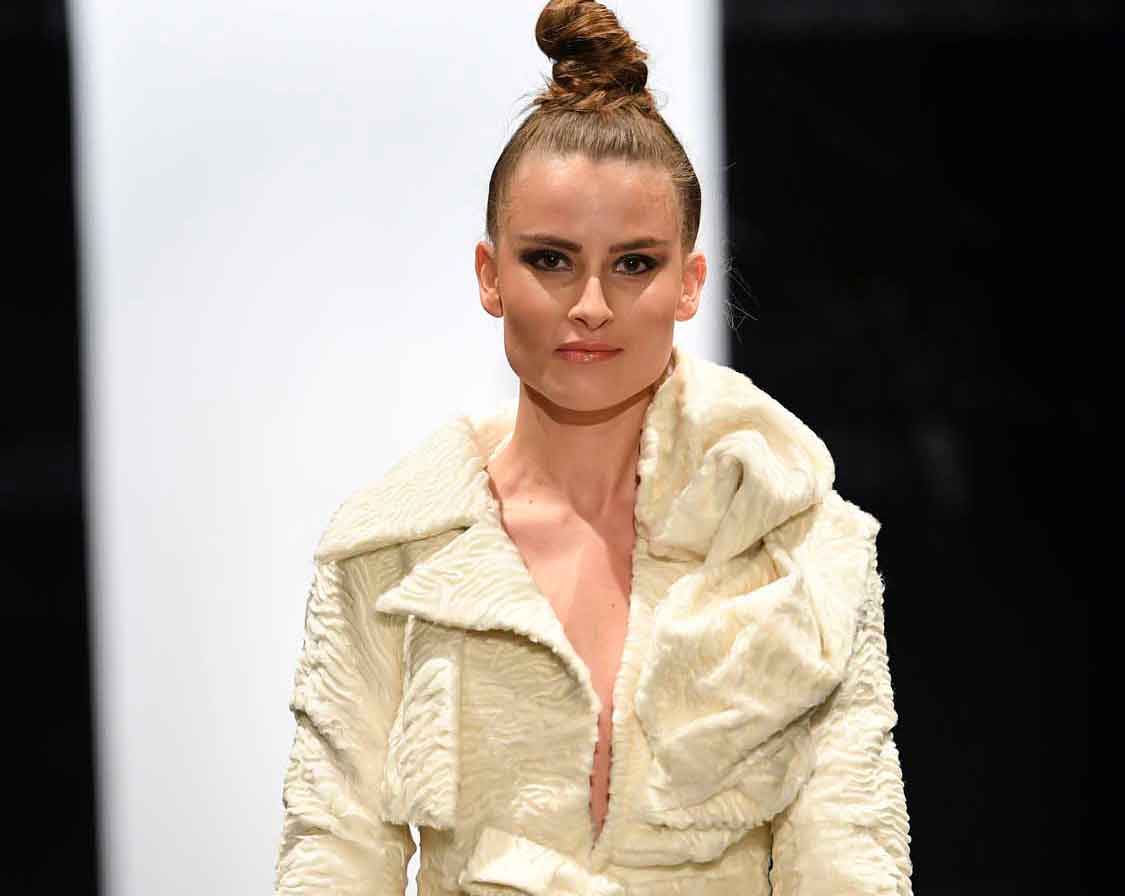 - In something like a plain colour coat, the material can speak for and elevate that silhouette immediately, he says, describing the patterns and curls found on Swakara skins.

Bred in Namibia since 1907, Swakara sheep form a vital and sustainable livelihood for people in one of the country’s most inhospitable areas. The lustrous gloss and distinctive pattern of compact swirls and folds is sold exclusively by Kopenhagen Fur.

- Nothing beats nature, he says.

- Fur has its own look to it, which you can use to your advantage and to the finished look of the garment.

Simonsen recently used the lambskin to construct a sleek and deceptively-simple opera coat for the 110th anniversary of Swakara breeding in Africa.

- It had to be something quite spectacular. I wanted to pull out the big guns, the Danish couturier says.

The idea of the coat is to unite the two disciplines of haute couture, known in French as tailleur and flou.

One is, much as it sounds in English, devoted to detailed pattern-based tailoring, like a two-piece suit. While for flou flourishes (meaning soft), think of delicate draped fabrics, like chiffon or silk organza.

- I wanted to try and unite the two worlds. The coatdress is basically on one side strictly constructed, and on the other side you have something completely soft and draped.

The combination of flowing and fitted looks gives an asymmetric and eye-catching design, that while appearing effortless is difficult to construct.

Simonsen has long enjoyed designing with the intricate folds and motifs of Swakara.

- Fur is an incorporated part of a winter collection when you do couture, Simonsen says.

- I’ve used Swakara many times before both in various fashion houses around Paris and also in my own business.

But to stretch the boundaries of what he could do with the material, he enlisted the help of furriers at Kopenhagen Fur Studio.

- You have a triple lapel on this coat for instance, and that’s quite a feat to do to have it fit perfectly and sit perfectly.

Another challenge for Simonsen was to execute his vision of airy draped fabrics using fur without the coat becoming too heavy.

- You don’t necessarily drape in a leather-backed material, but it’s not an issue with Swakara since it’s beautifully tanned and very soft.

He also worked with the Kopenhagen Fur furriers to use the skins in the most efficient way possible.

- Everything was merged with this technique of cutting the skin up in waves so that you don’t see where it comes together. It disappears into the design of the Swakara, he says.

To create the effect of a double-layered skirt with a running series of pleats, for instance, he merged the Swakara onto a fabric backing of cashmere and llama wool that gives warmth while retaining lightness.

Simonsen also used this intarsia technique to add an extra design element, cutting out certain strips of the Swakara and applying them onto the wool fabric of the underskirt and coat sleeves.

- It’s a matter of keeping the garment lighter as well as using just the material that you need, Simonsen says.

No stranger to making couture with different rule sets, Simonsen hopes that garments like the Swakara coat will show that haute couture, slow-fashion garments that are made by hand can be for any occasion or budget.

- When someone comes to my door I would always study if I could do something for them. I made a wedding dress that only cost the bride 800 euros, Simonsen says.

- Couture doesn’t have to be an over-expensive extravagant affair, he says.

- Swakara itself is very beautiful, so that always lends itself to a celebration.