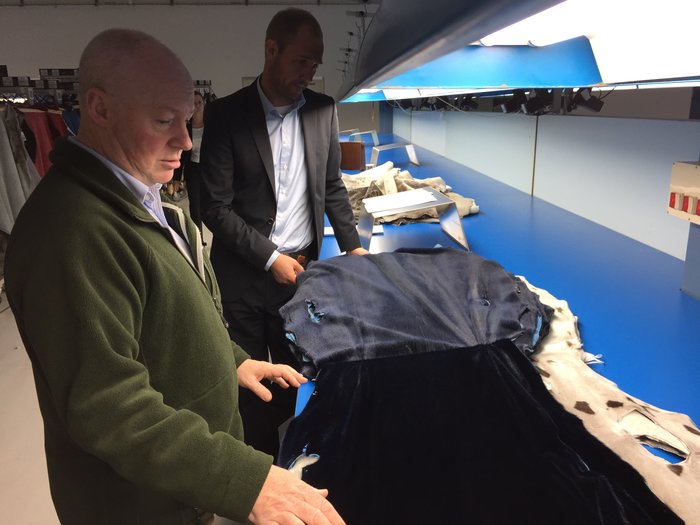 Greg Whyte (On the left) purchased approx 600 seal skins for his business.

Sporrans made of sealskins are about to have a comeback in Scotland. At least if Greg Whyte has something to say about the matter. He has made sporrans since 1999 in the company Margaret Morrison, which is based in Perth, Scotland.

Back then, they used seal skins for their sporrans. This was one of the traditional materials used in the unique Scottish accessory. For those who need a reminder, a sporran is a pouch used in the traditional Scottish Highland Dress for men. It performs the function of pockets on the pocketless kilt.

The sporran is every bit as Scottish as the kilt, and sealskins were a vital material used in sporrans.

Sporrans can be designed differently. Leather, horsehair and animal mask sporrans where the head forms a flap that folds over the pouch.

- The sporran can be used for casual wear, semi-dress and formal occasions. It's all in the design, Greg Whyte says.
According to Greg Whyte, the use of sealskins stopped around 2009 when the EU Ban on Seal Products was implemented. Neither he, nor his business partner knew at that time, that the legislation permitted the use of sealskins supplied by Inuit hunters.

- We used sealskins in approx. 90 percent of our work prior to the EU-legislation. But after that we stopped using them completely, because we thought it was illegal. I believe that many in Europe misunderstand this legislation, Greg Whyte says.
After the ban, Margaret Morrison used calfskin instead. However, this skin type does not have the same qualities as seal.

- Seal is an amazing material. It is very durable. Some companies rent sporrans and kilt to people and the garments take a beating. Seal can be used over and over again, and it still keeps its lustre. Also, it is easy to work with, Greg Whyte says.

Now that he is aware of the seal offering at Kopenhagen Fur, he intends to purchase skins and reincorporate them into the company's product line-up.